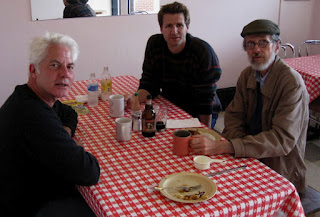 Robert flew to the West Coast early May and visited some old friends. Around May 21st he took the train to Minneapolis where his extended family members brought him to his family's roots in Southeast Minnesota. After some days there, Robert came down to Madison to sign the new Wildwood Serigraph edition (San Francisco Comics).

We have some pictures of our luncheon at John Roussos' New Orleans take-out where Robert ate Jumbalaya, lamp chops, asparagus and bread pudding, The guy can put it down.

Afterward we ambled through the Chazen museum where there was a show about underground comics.

Late May he flew back to France from O'Hare where he will soon begin his collaborative book with Aline. He'll probably be back this Fall for the release of Genesis.
Posted by Todd Merrick Novak (aka beanlynch) at 4:38 PM