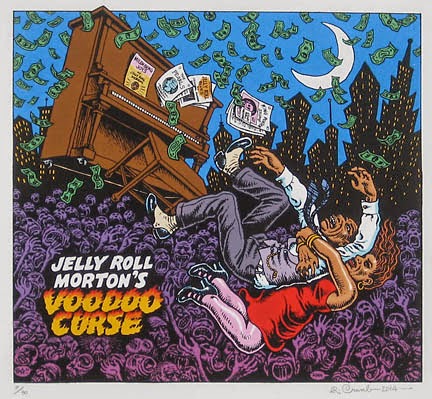 In 2002, Crumb created a new illustration for the cover of The Complete Crumb, Volume 16. This year, he enlarged that drawing (and edited other elements) to create our new serigraph edition. This is an edition of 90 prints using 17 colors. The image size is 12" x 11." The white paper is 19" x 18." Each print comes with a certificate of authenticity and your complete satisfaction or your money back. Signed by Robert Crumb. Below is the copy Crumb wrote for the certificate:

Jelly Roll Morton's Voodoo Curse
This drawing was originally made for the cover of The Complete Crumb, Volume 16 (2002), which contained a story of the same name, which in turn originally appeared in an issue of Raw Magazine (issue #7, 1985). This story was my graphic adaptation from a segment of the book Mister Jelly Roll by Alan Lomax, published in 1950. In this book, Lomax transcribed Jelly Roll Morton himself telling his own life story, recorded by Lomax for the Library of Congress circa 1940. These recordings of Jelly Roll Morton, in which he intermittently plays tunes on the piano and talks, are now commercially available to the public in a multi-volume set.

Jelly Roll Morton was born in New Orleans in the early 1880's of "Creole" parentage. Morton claimed that he "invented" jazz music in the year 1902. Although an arrogant, overbearing character, Morton was, in fact, a superior musician, composer and band leader. His career culminated in the late 1920's, a period in which he recorded many jazz masterpieces, mostly his own compositions, piano solos as well as small and large band performances.

Morton's supreme self-confidence began to falter around 1930 and bit by bit the trappings of worldly success fell away from him. His music publishing business failed, he suffered loss of prestige among his colleagues, his personal life went all to pieces. He attributed these misfortunes to the "underground forces" of Voodoo – the power of curses, spells, rituals, powders and potions imbued with the psychic power to cause him harm or bring bad luck. New Orleans, where he came from, had a very strong tradition of "Black Arts." Superstition? Who can say? I wouldn't presume.