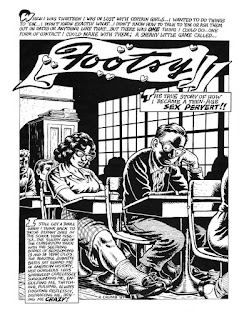 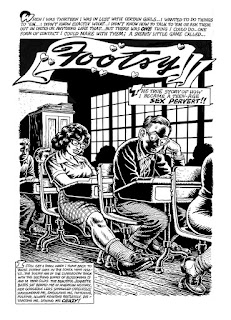 In Weirdo #20 (1987), Crumb created an 8 page comic called Footsy. The splash page was later used to create Wildwood's first serigraph edition (30 colors) with Crumb. Above is the image as it appeared in Weirdo. In 2012, a French publisher asked if he could use that same illustration for the cover of a French edition of My Troubles With Women. Crumb used that opportunity to rework the illustration. The following are Crumb's comments about why he reworked the illustration.

Crumb: I reworked the illustration because I wanted to make the desks more authentic looking. I discovered a photograph in an old high school yearbook from the school I went to that showed the desks in their complete structure. I was never satisfied with the way I drew those desks originally. I don’t know why I made them look like this bell shaped-pedestal type of thing. I don’t know where I got that. They were nothing like that, obviously, when I saw the photo. So last year, when the publisher asked to use that illustration for the cover of My Troubles With Women [the French version], I saw that as my chance to make it right; you know, obsessive-compulsive type of stuff.

Alex: You think it looks better?

Crumb: Yes I do. I think it looks much better. And I tend to do those kind of corrections a lot if I see something I did wrong in an earlier drawing and it’s going to be reprinted, I usually correct it and make it right before it’s printed again.

Alex: So it’s nothing uncommon, you rework drawings all the time if you can correct a problem.

Crumb: Yeah, I do it a lot. If the thing’s gonna be reprinted, y’ know, I have to correct any mistakes. So I think this looks much better.

Rcrumb.com is proud to present an edition of 50 reworked Footsy etchings. White archival Hahnemuhle paper is 12 x 16.5 inches. Image size is 7.5 x 11 inches. Embossed area is 8.5 x almost 12 inches.  Each print is numbered, dated and signed by Crumb, and comes with our guarantee for your complete satisfaction. (There are no certificates of authenticity offered with etching editions.)

Check the Official RCrumb Site for a detailed, illustrated explanation of how Wildwood creates Crumb etchings.