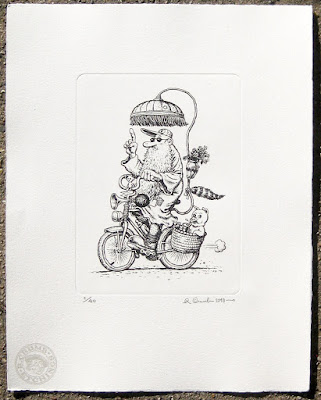 The Release of R. Crumb's Mr. Natural on a Bicycle Etching Edition

This drawing was originally created as an advertisement for the Winters Bike Shop in Winters, California circa 1989, two years before Crumb moved to France. It’s one of the more happy and carefree pictures of Mr. Natural, riding his special bike, custom designed by Crumb himself.

The pig in the basket is an interesting character. Crumb first introduced that character in his strip The R. Crumb $uck$e$$ Story (The People’s Comics, 1972). He brought him back for I Remember the Sixties (Weirdo #4, 1981) and My Troubles With Women, Part 2 (Hup #1, 1987). When I asked Crumb what the character was about, Crumb said, “I don’t know what that pig is about. I don’t understand it myself. [laughs] I can’t explain him. I don’t know what it means. I never consciously defined what the pig was in my own mind. It just seemed funny to me when I drew it. That stuff just comes out of my subconscious. I don’t stop to analyze what it means.” A couple of years ago, Crumb named the pig Prufrock Piggy. There you go–you learn something everyday.

There are 40 etchings in this edition, with an additional 5 artist proofs and 3 printer proofs. Each print is numbered, signed and dated by Crumb. There are no custom signatures in this edition. The white Hahnemuhle paper is 11” x 14”. The embossed area is 6”x 8”. The image is 5” x 7”. Each print comes with our guarantee for your complete satisfaction.
$380
Buy Me