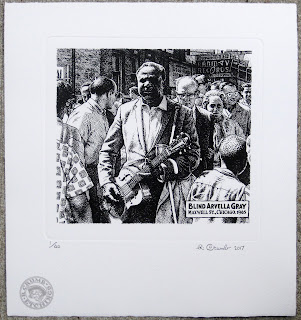 Each year I go through all of Crumb's work looking for images to print as etching editions. Once I get some prospective pieces together, I call him up and we discuss which images we should publish. But this year is the first year that Robert called me and told me he had an image he wanted us to publish as an etching edition. A friend of Robert's had given him a photograph of a blues musician playing on Maxwell Street (Chicago) in the mid-60's. It inspired Robert to do an ink drawing of the photograph. Crumb was so pleased with the way it turned out, he suggested it as the next etching edition.

So we're both very pleased to present the latest Crumb etching edition of 40 prints. It's of the blues busker Blind Arvella Gray. I don't think he was a well-known or famous blues player, although if you Google him some clips do appear. Rather, it's the image itself, and how well Crumb has captured a sunny day in America in the mid-60's.

There are 40 prints in the edition, with an additional 8 Artist's proofs and 3 printer proofs. The paper size is 12" x 13". The embossed area is 8.75" x 8.25". The image size is 8" x 7". None of the prints were customized with a special Crumb nick-name. Each print comes with our guarantee for your complete satisfaction. Release date is Tuesday, September 19th, 2017.

An interesting side note: the store in the background (Radio-TV-Records Mart) had a backroom where Muddy Waters, Little Walter and Jimmy Young all recorded their first demos in Chicago. This according to a web page dedicated to the memory of the store owner, Bernard Abrams.


SOLD OUT
Posted by Todd Merrick Novak (aka beanlynch) at 11:21 PM