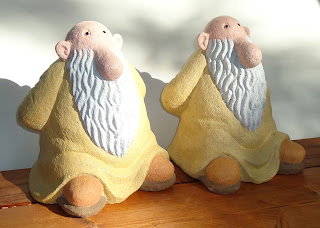 In 2010, we released an edition of 40 sandstone statues of Mr. Natural, hand-carved in Bali under my direct supervision. In the process of creating those statues, we experimented with several carvers and different types of stone. The most experienced carver used volcanic stone (which is a very hard stone, and difficult to sculpt) and he did a great job. However, I preferred the sandstone, as it was almost white (which means it could be tinted easily), and could be sanded down to a very smooth texture. After sealing the sandstone, I thought the texture of those Mr. Naturals looked better, so we used them for the edition.
I still have five prototype "volcanic" Mr. Natural statues. I'm keeping one and selling four. The statues are sealed and hand-painted. Their actual shape is perfect. However, their texture (more course and pitted) and color (darker and speckled) is what made me chose the sandstone for the edition pieces. These four statues are very hard stone and are completely sealed, so they may be placed inside or out. (I don't think it's a good idea to leave the sandstone statues outside, as it's such soft stone.)
The volcanic Mr. Naturals are not part of the limited edition statues. They are marked as prototypes. The four statues are now available for $350 each. As they are heavier than the sandstone statues, shipping will $60 dollars per piece. Sorry, no shipments to Canada or international shipping due to excessive weight.