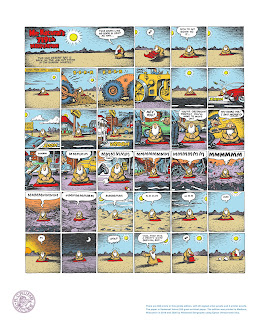 We released a signed serigraph edition of Crumb's Mr. Natural's 719th Meditation in April of this year. The 100 print signed edition sold out quickly, and since then we've received many requests to release the image as an unsigned giclée edition to give those Crumb fans who were unable to purchase the serigraph an opportunity to buy the giclée. So by popular demand, we're releasing the giclée edition of R. Crumb's Mr. Natural's 719th Meditation. There are 300 prints in this edition which very closely resembles the serigraph edition. However, publisher Alex Wood has made several minor changes: the upturned earth in the construction panels is darker than the surface sand; a building in the background has been changed to a brick building, and other minor changes too insignificant to mention here.

The size of the image is the same as the serigraph: 16" x 18". The size of the Somerset Velvet 255 gram archival paper is 20" x 24". Each print of the 300 print edition is hand-numbered. Release date is Friday, November 29th. Your satisfaction is guaranteed.

WEIRDO Back Issues For Sale 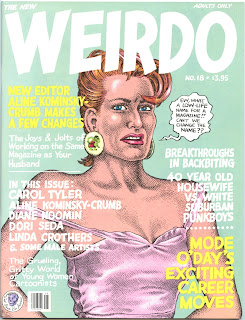 Almost 20 years ago, Jesse Crumb sent me a large box with all sorts of Crumb-related things inside, including an assortment of new Weirdo comic books. I recently opened that box, scanned the different Weirdo comics he sent me, and we're now making them available for sale. There are about 8 or 9 different Weirdo comics for sale, and I only have three or four comics per title. They're like new, in Near Mint condition–you can go back to the '80's for $5 per comic! You can find them in the Comics page at RCrumb.com.

Posted by Todd Merrick Novak (aka beanlynch) at 1:00 PM 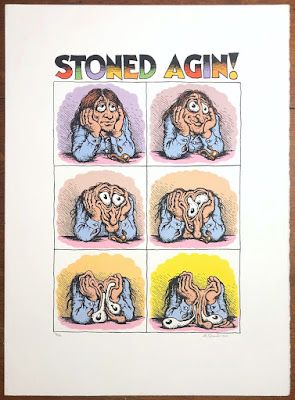 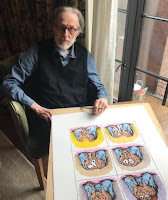 Crumb drew and published this famous comic strip in 1970. It's been reprinted (mostly pirated) extensively throughout America and Europe since then. The many color versions were never approved by Crumb, and finally, specifically for this edition, Crumb has colored Stoned Agin!  himself. He comments on his color work:
"The image was too claustrophobic to have all the squares colored in because there's no space between the panels–this thin line, that's all there is. So I thought that it needed some breathing room around the color. I've seen other versions where people have filled in the entire panels with color and I never thought it looked good. It just needed some white space. And I chose the first panel to be a very neutral color, like normal, sober reality. But as you get stoned, it gets warmer and warmer until you get this mellow glow. At least that's how it was in the beginning. But I go into more detail about that in the certificate of authenticity." 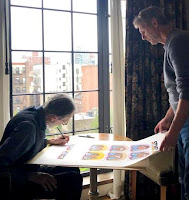 We're proud to announce the release of the new Crumb 18 color serigraph edition. The edition is 170 prints. The white paper is archival BFK Rives paper which is 22" x 30". The image size is 14.5 x 22". Each print is numbered, signed and dated by Crumb. Each print also comes with its own certificate of authenticity, which was written by Crumb. Release date is Friday, November 15th. Your satisfaction is guaranteed.

Posted by Todd Merrick Novak (aka beanlynch) at 10:23 PM