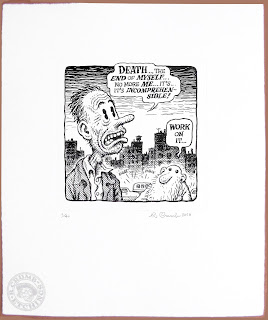 On the inside cover of Crumb’s comic book Mystic Funnies #1 (1997) is a strip called “Mr. Natural & Flakey Foont Thinkin’ About Death n’ Stuff”. In the early-2000’s, Jesse and I, with Crumb’s approval and help, condensed the first two panels of the strip into one to create the Work On it t-shirt for the website, which was then owned by Jesse. It’s still selling well because it’s so funny. In fact, it’s one of my favorite cartoons of all time. Maybe because we all wrestle with the concept and fear of our own death (with poor results) that this becomes so amusing for us to witness someone else spinning their wheels. It’s funny, poignant and effectively uses both of Crumb’s best known characters–Flakey sweating and fretting while Mr. Natural stays cool. 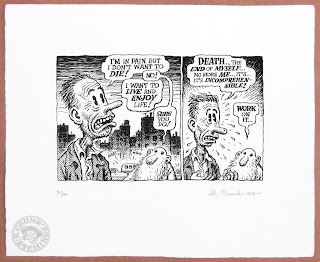 Both editions are numbered, signed and dated by Crumb. Neither of the editions have any customized sigs (except one signed R. “I’m Still Workin’ On It” Crumb which is not for sale). Both editions are for sale for $420 per print.
Release date: Friday, November 30th, 2018.

Posted by Todd Merrick Novak (aka beanlynch) at 12:58 AM