Each July I sell prints from my personal print collection, or prints acquired in trades. All of these prints are from editions that are now sold out. They're in mint condition and have been stored in a flat file where they have never been exposed to light. I highly recommend using UV protected glass if you're going to buy and frame any of these prints.

These prints can also be purchased at RCrumb.com
Click on the images to view them at a larger size.

Heroes of the Blues Serigraph Print
This 150 print serigraph edition sold out within a year it was published (2010). The cream paper size is 22" x 30", image size is 16.5" x 25". This is print number #15, and is specially signed by Crumb as "Half-Blind" R. Crumb. There were 17 colors used to create this edition. Comes with its cert written by Crumb. Mint condition.
$750
Buy Me 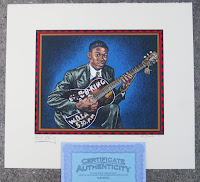 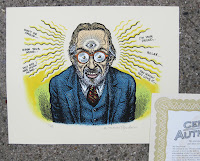 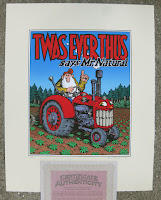 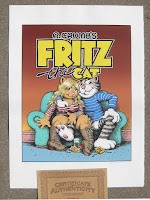 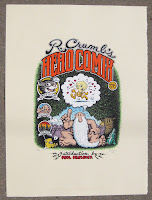 Head Comix Serigraph Print
This edition was printed in 2001. The edition never had a certificate created for it. There is a very light indicia printed at the bottom of the cream paper, which is 22" x 30". The image size is 14" x 18.5". There were 18 colors used to print the edition. Numbered, signed and dated by Crumb.
Stored flat; never has seen the light of day.
$700
Buy Me

Mr. Natural #2 Serigraph Print
This 110 print edition sold was printed and released in 2005. The cream paper is 22" x 30". The image size is 15" x 22". There were 19 colors used to print this edition with 16 screens. There was never a certificate issued with this edition, so there's no cert. There is an indicia printed at the bottom of each print giving all the information of the edition. Numbered, dated and signed (as R "Mr. Hateful" Crumb). This is print #43/110. Mint condition.
$750
Buy Me 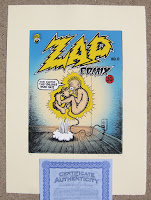 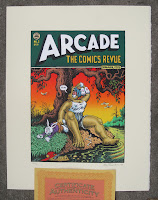 Arcade #2 Serigraph Print
This 120 print edition was printed and signed in 2005. It took a while to sell out but it remains a high point in our collection of editions. There were 23 colors and 21 screens used to create this edition. The registration and spit-fountains (a total of five blends were used in the edition!) work perfectly. I was also able to hold the best detail with 230 mesh/dpi dither output of the films I used–the perfect combination. I think, as a printer, this is one of the best editions I've printed. The image size is 13" x 18.5". The cream paper size is 20" x 26". Comes with its cert, written by Crumb, and in mint condition. This is print #108/120.
$750
Buy Me

Self-Loathing Black and White Print
Here's an unusual print. Self-Loathing Comics was a 40 print color serigraph edition with three additional black & white only prints. These black and white prints were included in the edition but numbered with roman numerals. This print is numbered as II/III B.&W., signed and dated by R. "Silly Boy" Crumb. The edition was signed in 2015. The white paper is 12" x 16.5". The image size is 8" x 11.5". There is no certificate for this edition. Rather, there is an indicia printed at the bottom of each print, including these black and white prints. The edition sold out in 2016, but the black and white prints were never offered. I have all three and am selling #II/III now.
$500
Buy Me 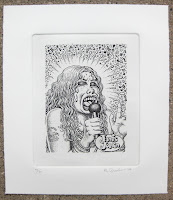 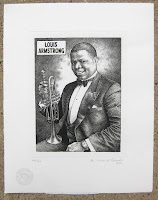 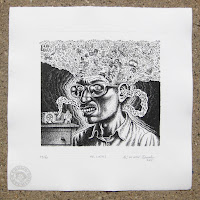 Mr. Sixties Etching
This 40 print edition was released in 2015. It sold out quickly. I held on to this print because he signed it R. "Oh Wow" Crumb. This is print number #34/40. The paper size is 13" x 13". The image size is 8.5" x 7.5". The paper is slightly buckled around the edges as the entire edition dried that way. It will matt and frame completely flat. Mint condition.
$750
Buy Me 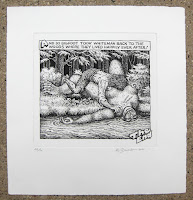 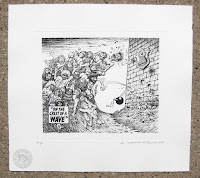 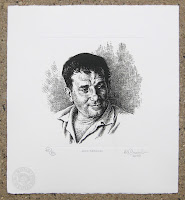 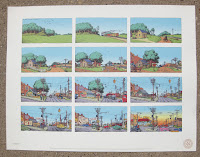 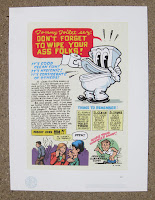 Tommy the Toilet Giclee
First printed and released as a giclee edition in 2008, it took six years for this 200 print edition to sell out. I still have three prints left from the edition: #1, #2 and #199/200. I'm selling #2 now. The acid-free paper is 18" x 24". The image size is 13" x 19". The number is stamped (early giclee prints were stamped with numbers, this was later replaced by numbering by hand with pencil) in the lower left-hand corner of the print. None of the prints in this edition–except the artist proofs–are signed.
$200
Buy Me
Posted by Todd Merrick Novak (aka beanlynch) at 1:02 AM