In 1971, Crumb wrote and illustrated his Mr. Natural #2 comic book. In 2005, Crumb reworked the cover illustration and it was released as a limited serigraph edition later that year. This limited giclee edition is based upon that serigraph edition with minor changes. There are 300 prints in the hand-numbered giclee edition, printed on white Somerset Velvet 255 gram enhanced paper using Epson Ultrachrome archival inks. 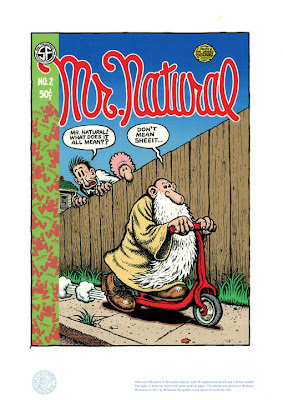 Crumb on the Famous and Infamous,
Part Two

The Official R.Crumb Site has just posted the second part of an exclusive interview with Robert Crumb, voicing his opinions on a list of celebrities posed by Wildwood Serigraphs' Alex Wood. Alex explains, "Over the years, talking with Robert about many different things, I've been surprised by some of the things he likes and dislikes. We all know he loves old music from the early part of the last century, and doesn't like rock music. But then he says he likes Tommy James and the Shondells, and Sam the Sham and the Pharaohs? So in a continuing discussion in September, 2011, I asked his opinion on a list of people in the news past and present."
Part Two