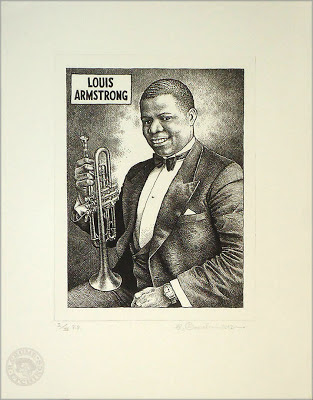 In 2010, Crumb drew this portrait of Louis Armstrong for someone in exchange for some 78 rpm records. It's a fantastic portrait, with a lot of cross-hatching, and it didn't take us long to realize it would make one hell of a great etching. We printed 50 of 'em, and they came out beautifully. The detail is exquisite and the black is luxuriously saturated. They're available exclusively for Crumb Newsletter readers first — we'll release them on the site later. Because the edition is only 50, this edition may sell out before being released on the website or sold to the general public (as has happened with previous Crumb etchings.) Each print is signed, numbered and dated by Robert Crumb, and comes with our complete guarantee for your satisfaction or your money back.

Remember that in addition to prints, The Official Crumb Site carries books and comics, including Drawn Together; Robert's new collaboration with his wife Aline. 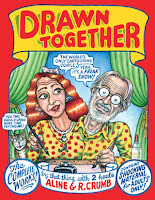 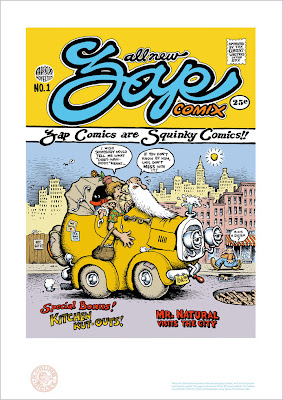 If you don't know the entire history of this iconic image, click this Wikipedia link to read about it.

The cover image was originally printed with three colors (black, process yellow and process blue) in 1968, but a full color serigraph edition was released by Kitchen Sink in 1992. However, Crumb wasn't very happy with the final colors in that print, so he was adamant that his color instructions be closely followed for this new edition. He wanted the top of the image and car to match the original comic cover. I tried talking him into putting a light blue, metallic sheen in the radiator, but he wanted it white, so I followed his instructions. He approved a color rough via the internet in Paris (the first time we've done that) and we're releasing this edition on Friday, September 28th. The unsigned edition is limited to 300 prints.

The paper is, as always, Somerset Velvet 255 gram archival stock. The inks we use are simply the best inks available — Epson Ultrachrome inks. The paper size is 17" x 24". The image size is 14" x 18.5". This, and every Wildwood Serigraph print, is unconditionally guaranteed for your complete satisfaction or your money back. 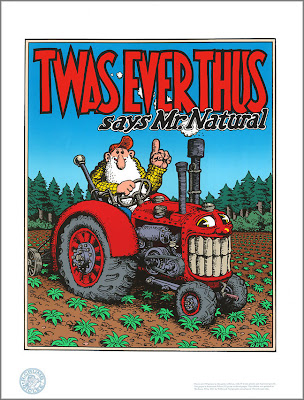 Crumb's Twas Ever Thus was originally created and published in 1969, on the back cover of Changes #3, a hippie magazine published in Oakland, California. Soon after, it became more popular when it was printed as a poster. In 2008 we printed this image, with some color revisions, as a signed serigraph edition. Now, based upon that sold-out serigraph edition, we're releasing a new giclee edition of Crumb's Twas Ever Thus.

The image size is 15" x 18.5". The Somerset enhanced archival white paper is 18" x 24". The giclee prints are shipped in indestructible tubes. Every print from Wildwood Serigraphs comes with our unconditional guarantee for your complete satisfaction or your money back. Unsigned edition limited to 300 prints.  Release date: August 28, 2012.

CRUMB ON OTHERS, Part 4

Please check out the Official Crumb Site for Crumb on Others, the fourth part of a continuing series of discussions between Robert Crumb and Wildwood Serigraph's Alex Wood. In a discussion from August, 2012, Alex asks Robert for his opinions on artists, celebrities, and politicians including Woody Allen, the Marx Brothers, Abraham Lincoln and more.

The R.Crumb Site is announcing another one-and-done sale of rare lithographs and etchings from sold-out editions.

Publisher Alex Wood is offering select prints from his personal collection, along with artist proofs from Robert Crumb, at the most reasonable prices available. Their authenticity and quality is guaranteed by Wildwood Serigraphs and the Official R.Crumb Site.

Please see the Special Offers page of the R.Crumb Site for these and other offerings.
Posted by Tom at 12:30 PM

Heroes of the Blues Giclee 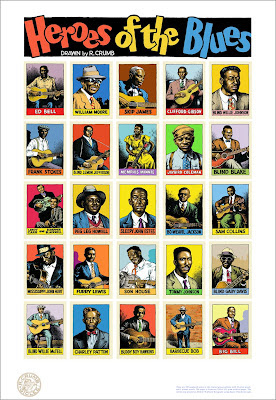 The Official Crumb Site is pleased to announce the release of the Heroes Of The Blues limited giclee edition. This giclee print has been digitally remastered from the artwork of the serigraph edition published in 2010, which is now sold out. 16 colors were used in that serigraph, the unusually large number of screens being necessary to mix and simulate the colors specified by Crumb. Still, some compromises had to be made due to the nature of the screening process. But with this new giclee edition, each color was matched without any limitations, resulting in a print truer to Crumb's original intentions.

The image size in both editions is the same: 16.5 inches wide by 25 inches tall. The Somerset Velvet 255 archival paper is 22 inches by 29 inches. This paper is white, as opposed to the cream of the serigraph edition, and a cream border is printed on each card.

The Heroes Of The Blues giclee edition will be released Tuesday, June 26th. The unsigned edition is limited to 300 prints, and its color and detail are outstanding. Your complete satisfaction is guaranteed or your money back. If you missed the opportunity to buy a print from the serigraph edition, here is your chance to purchase and enjoy some of Crumb's best portraits, celebrating America's musical heritage. 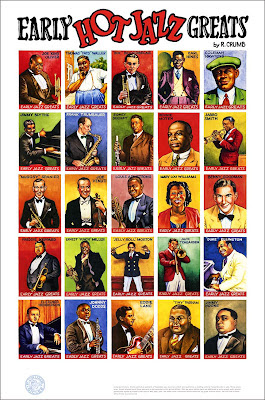 In 1982, Crumb created 36 watercolor portraits of early jazz musicians for Yazoo Records, which published them as a deck of trading cards. Thirty years later, Robert has selected 25 of those portraits (listed below) and we present them, arranged 5 x 5, in a new display print titled Early Hot Jazz Greats. Unlike the images in the 2011 Heroes Of The Blues edition, Crumb did not want the jazz portraits printed with a card border. This way, each image is larger, so the subtlety and detail of the watercolors is more apparent. It's also for this reason that we chose the medium of gicleé (inkjet printing) for the edition. Serigraphy would never have been able to capture the beauty and subtlety each portrait possesses. A beautiful, rich and vibrant edition was created, and you have our guarantee for your complete satisfaction or your money back.

There are 140 prints in the edition, plus 14 artist proofs and 3 printer proofs. The white Somerset Velvet Enhanced Matte archival paper is 22" x 30." The image size is 17" x 24", printed with Epson's archival K3 Ultrachrome inks. Each print will be numbered, signed and dated by Robert Crumb in Chicago this week, and the edition will be released on Friday, May 18th.

CRUMB ON OTHERS, Part 3 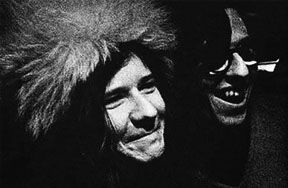 Alex Wood has just finished the third in his continuing series of Crumb On Others interviews.  Alex explains, "Over the years, talking with Robert, I've been surprised by many of his likes and dislikes. In a discussion in March, 2012, I asked for his comments on Janis Joplin, Hitler, Kurtzman, Bukowski and others in the news past and present, many suggested by our readers. We have plenty of names still to discuss, but if you'd like to hear Robert's opinion on someone we haven't covered, please e-mail your suggestions to tom@rcrumb.com. We can't promise that we will get to all of them, but we will add them to the list for future interviews."

UPCOMING RELEASE
The next print release from Wildwood Serigraphs and the Official Crumb Site will be a signed and numbered giclee edition of Early Hot Jazz Greats, based on the trading card series. It will be a companion print to our Heroes of the Blues serigraph. This time, rather than a serigraph, Crumb and Alex have decided that the only way to create an edition of the Early Hot Jazz Greats is as a giclee print. This is because Crumb created each portrait in watercolor, and serigraphy wouldn't be able to capture all the subtlety in the art. Crumb has selected 25 images which will be displayed in the print: King Oliver, Thomas “Fats” Waller, “Bix” Beiderbecke, Earl Hines, Coleman Hawkins, Jimmy Blythe, Frank Trumbauer, Sidney Bechet, Bennie Mozen, Jabbo Smith, “Muggsy” Spanier, Joe Venuti, Louis Armstrong, Mary Lou Williams, Benny Goodman, Freddy Keppard, Ernest “Punch” Miller, “Jelly Roll” Morton, Jack Teagarden, “Duke” Ellington, Fletcher Henderson, Johnny Dodds, Eddie Lang, “Tiny” Parham and Jimmy Noone. The paper and images will be the same size as the Blues edition (22" x 30"), but on white paper, not cream. We're expecting to complete the edition in May, and Robert will sign it when he attends a May comics forum in Chicago.
Posted by Tom at 10:15 AM 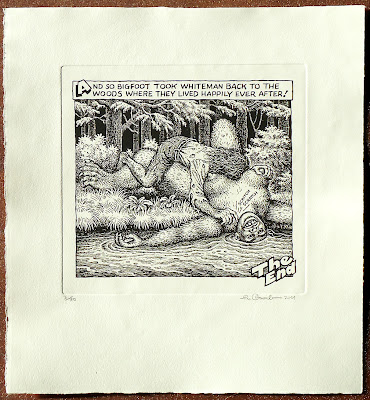 Wildwood Serigraphs and The Official R.Crumb Site are proud to announce the release of a new Crumb etching. The image is from one of Robert's best-known stories "Whiteman Meets Bigfoot." It's the last panel, in fact, and as close as Crumb ever gets to "happily ever after". This story first appeared in Kitchen Sink's Home Grown Funnies, which was their best-selling comic book of all time, with sales of over 160,000 copies. The reason for its popularity was simple: almost the entire book consisted of the legendary "Bigfoot" story; the longest Crumb had produced up until that time. It was upbeat, funny and even romantic -- not the standard Crumb fare.

Publisher Alex Wood explains,"I proposed the idea to use the last panel as an etching to Crumb some years ago. Robert thought the drawing was too crude, and didn't want it released in its original form; he would have to rework it for the etching. He ended up starting over from scratch, completely redrawing the image for this edition."

There are 50 etchings in the edition. The image size is  8" wide by 7" tall. The embossed area is about 9" wide and 8.5" tall. The white archival Hahemuhle paper is 14" wide by 13" tall. Each etching is signed, dated and numbered by Crumb. This is the cleanest, best etching edition we have ever printed, and we give you our unconditional guarantee for your complete satisfaction or your money back.
$430 each + shipping
Buy Me
Posted by Tom at 5:30 PM