Over the years, Robert gave specially signed posters and some of his artist proofs to his close friend Carol Vinson. Now, both Carol and Robert have asked me to sell those prints and posters for her. I sold the first batch of her prints several years ago. And now we offer the second half of Carol's collection. 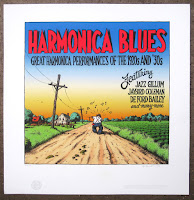 Les Primitifs Du Futur
This is a French poster signed by Crumb underneath the word "Futur." The relatively thin paper size is 16" x 23.5". It's crinkled in the corners and not in mint condition.
$250
Buy Me 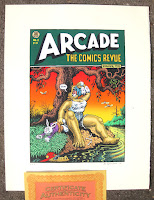 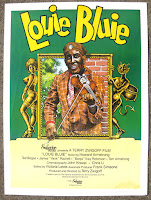 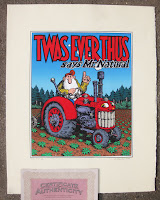 Twas Ever Thus
This 150 print edition was released in 2008. There are 15 artist proofs and this is proof number 1/15 signed and numbered by Crumb. Comes with its own cert also written by Crumb. Mint condition.
$850
Buy Me 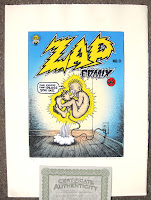 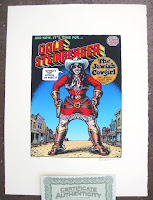 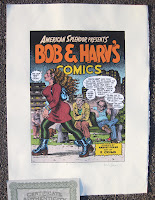 Bob N Harv Comics
There are 170 prints in this edition with 17 artist proofs. This is artist proof # 2/17, numbered in roman numerals and signed by Crumb. The edition, which was released in 2007, is signed by both Harvey Pekar and and R.C. Unfortunately, Harvey died within three years of signing this edition. Both he and Crumb wrote the certificate of authenticity which accompanies this print. The cream paper is 22" x 30". The image size is 14.5" x 20". Mint condition.
$500
Buy Me 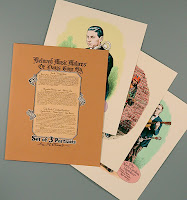 Beloved Music Makers of Days Gone By
This is a portfolio of three different individually numbered and signed prints. There are 200 portfolios in the edition, released in 1999. There are 15 artist proof portfolios, and this is portfolio # 1/15. Each portfolio is encompassed by a portfolio jacket and a certificate of authenticity.  This certificate, for some unknown reason, is signed by Alex Wood but not by Jesse Crumb. The portfolio cover is 13" x 16". The three prints inside (Jack Teagarden-jazz; Memphis Minnie & Kansas City Joe-blues; The North Carolina Ramblers-country) are each signed, dated and numbered by Crumb. Mint condition.
$700
Buy Me 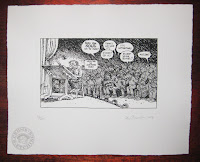 Bare Yer Soul Etching
This 40 print etching edition was released in 2016. It's taken from one of Crumb's sketchbooks. The edition sold out last year. This is print number 19/40. The paper size is 11" x 9". The image size is 7" x 4". It's numbered, signed and dated by Crumb. There are no certs issued with etching editions. Mint condition.

Posted by Todd Merrick Novak (aka beanlynch) at 4:18 AM