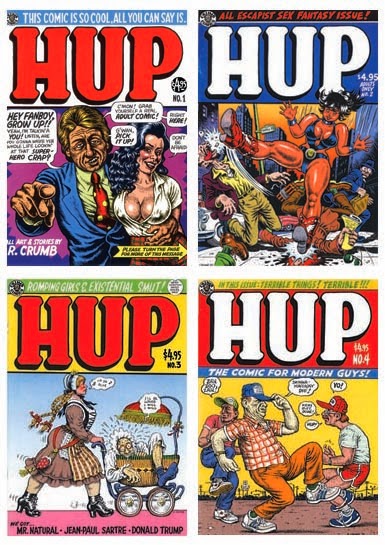 The Official Crumb Site is very pleased to announce the release of Crumb's Hup comics. Part of a four series collection, these comic books have been out of print for many years now. Written and drawn in the early '80's, Crumb brings back Mr. Natural and Flakey Foont and also introduces Cheryl Borck, The Devil Girl!

Many of Crumb's readers are only familiar with his work from the late 60's and early 70's. Yes, of course he created many inspired comics at that time. But the Hup Series takes on a whole new level of story-telling. In 1977, Crumb and his friend Terry Zwigoff spent months and months writing and rewriting scripts of Whiteman Meets Bigfoot to present to several producers in Hollywood. Crumb learned a lot about outlining, scripting and writing during that, what turned out to be, unsuccessful project. But it wasn't entirely unsuccessful; his comics changed after that. Instead of sitting down and starting with an empty page and letting the drawing lead him on, now Crumb would write the story before he drew it. It changed the cohesive nature of the strips, while strengthening his own style of writing and tempo. His illustrating had become stronger too.

Hup 1 starts with the Ruff-tuff Cream-Puffs as they Take Charge! Crumb amazingly predicts the Bush-Cheney-Rumsfeld Administration, which occurred some twenty years after he drew the piece. Next Crumb brings back Mr. Natural! Then the famous My Troubles with Women Part 2 follows that and Crumb finishes with Mr. Natural's return, but only this time with Cheryl Borck, the Devil Girl!
Hup #1 $5 Each  Buy Me

Hup 2 presents The Mighty Power Fems, Crumb's x-rated satire of super hero comics. Next is his hilarious If I Were King, finishing off with the continuation of Flakey Foont's obsession with The Devil Girl in The Meeting. Who could blame him?
Hup #2 $5 Each  Buy Me

Hup 3 (1989) contains: Crumb's whimsical, allegorical satire of himself with The Story of My Life!; an abridged excerpt of Sartre's Nausea; Crumb's take on the ugliness of America (Donald Trump); and the continuing story of Mr. Natural, Flakey Foont and THE DEVIL GIRL!
Hup #3 $5 Each  Buy Me

Hup 4 (1992) contains: Can You Stand Alone and Face Up To the Universe?; Crumb illustrates his excursion to the Academy Awards; Crumb continues his obsession with women with You Can't Have Them All (Magnificent Specimens I Have Seen); and Crumb concludes with Mr. Natural, Flakey Foont and, what is to be the last story depicting THE DEVIL GIRL.

Crumb has revised and enlarged a drawing he made for the cover of The Complete Crumb Volume 16 (published in 2002) titled Jelly Roll Morton's Voodoo Curse. He made specific color changes and we are in the process of printing it right now. The expected 100 piece edition will be finished by the time Crumb is on the west coast so he can sign the edition without the added transatlantic shipping expense (and customs hassle). It will be finished, signed and released in late May. Below is a black-and-white preview of the image, which will be printed in full color. 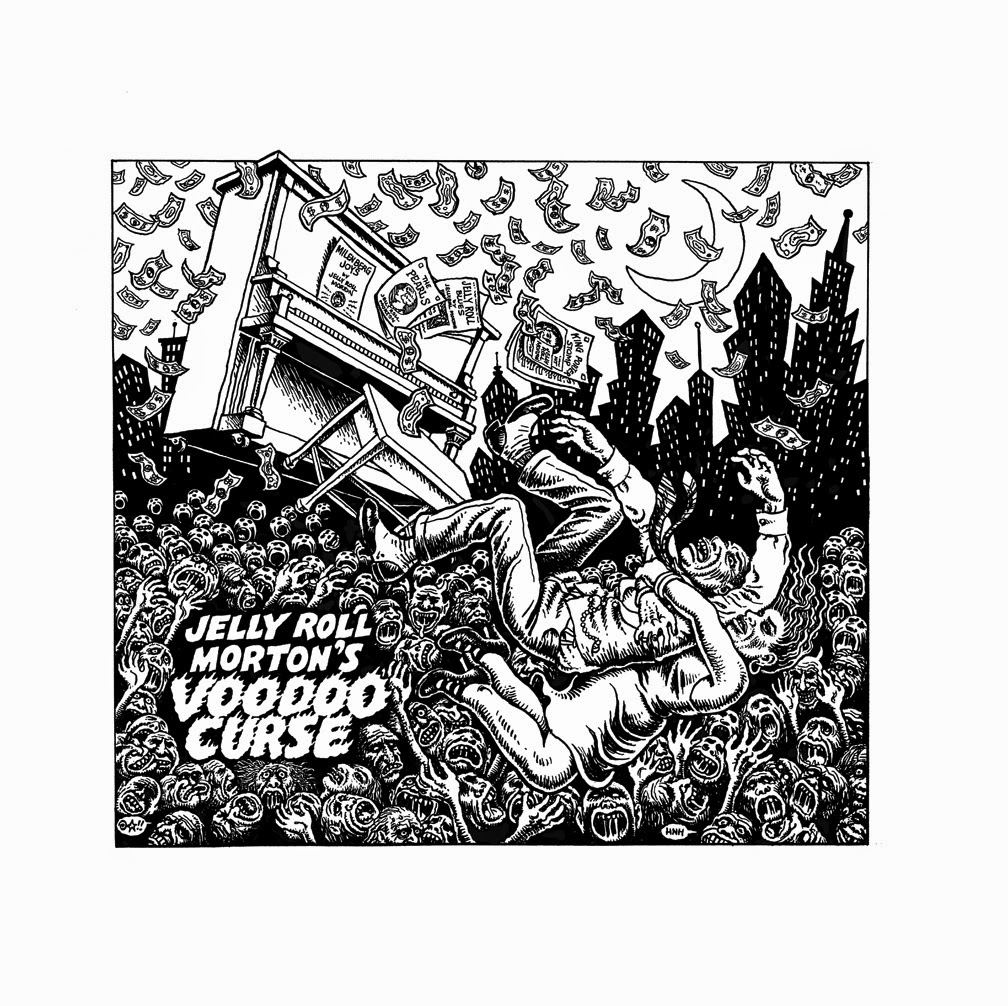