We made a mistake by posting the Short History of America 15 Panel giclee price as $430 on the Newsletter you received yesterday, which is incorrect. This is an unsigned giclee edition, so the price per print is actually $90, not $430. 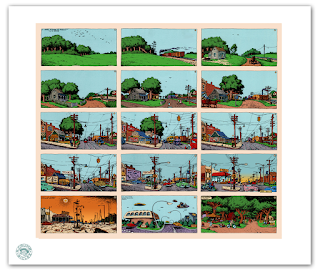 As long as we're sending out a new Newsletter to rectify our mistake yesterday, I would like to bring attention to some small details in the Short History of America edition that you might not notice:

In panel 10 (1940's), Crumb has suggested the old outline of the "El Ropo" cigar poster coming through the fading "Myer's Drug Store" sign on the brick wall. I have colored it accordingly, but you might need magnification to appreciate Crumb's attention to detail.

Also in panel 10, they implemented a new rain water sewage system as the grates show.

In panel 11 (1950's), they have replaced the 1940's railroad crossing light they had installed only about a decade earlier. America was wealthy around this time.

Those are just some of the details that I enjoy. There are many, many other details waiting to be enjoyed by another viewer.

Because the response has been stronger than I anticipated, I won't be able to fulfill all the orders until early next week. Thank you!

Alex
Posted by Todd Merrick Novak (aka beanlynch) at 8:20 AM

In 1992, Denis Kitchen of Kitchen Sink Press published Crumb's Short History of America as a serigraph edition. Denis might have requested Crumb to add three additional panels to the original 12 panel poster in an effort to differentiate the new serigraph edition from the posters. The three new panels predicted three possible future scenarios: Ecological disaster; Techno Fix and the Ecotopian Solution.
Denis hired me to print that edition, and I did, using 24 colors. Since then, I've printed and published the original 12 panel SHA serigraph edition, and also released it as a limited edition giclee print (500 pieces). Now, we're very excited to be releasing the giclee version of the 15 Panel Short History of America edition.
I scanned the 1992 serigraph and spent weeks cleaning it up, brightening up some colors in Photoshop as I knew Crumb considered the original serigraph edition too dark. I printed it out and sent it to Crumb for his approval. He had many color changes! All the trees and grass in each panel needed to be lightened. Certain cars had to have a certain color–"Turquoise was a popular color for Studebaker in those years," according to Crumb. And many other color changes per his historical color sense were requested. It took me over 70 hours to finish the job.
While I was on the phone with RC, I pointed out one of the details in the image, and said, "I've often wondered if you took this image from multiple historical photographs, or if you drew this from your imagination. This detail is so realistic, I have to think you found some photographs and based these panels off of them."

Crumb answered, "I drew that image entirely from my imagination. I wish I had found some photos, it would have been more accurate. For example, one mistake I made was with the railroad crossing signs. The real signs have "crossing" on one board, and the "rail" and the "road" broken up on the sign behind. I mistakenly flip-flopped 'em and broke up the word "crossing."

Each print is on Somerset Velvet archival white paper (25" x 22"). The 21" x 18.5" image is printed with archival Epson UltraChrome inks. The edition is 500 pieces, with 40 artist proofs and 3 printer proofs. Each print is numbered by hand in pencil. To be released Friday, April 27th. Your complete satisfaction is guaranteed.

Posted by Todd Merrick Novak (aka beanlynch) at 12:59 AM