Heroes of the Blues Serigraph Finished! 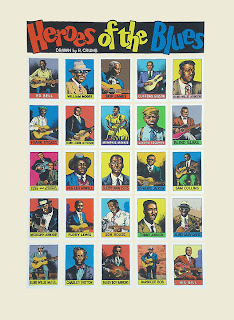 Alexander Wood, of Wildwood Serigraphs and The Official R.Crumb Site is pleased to announce that the long production process on the new Heroes of the Blues serigraph by Robert Crumb is now complete, and the 150-print edition will release on Tuesday, September 28.
$380
Buy Me

"After weeks of working on the computer, deleting the color from the Blues cards, after weeks of Robert reworking the black line of each portrait, after weeks of grouping and adding the color back to the revised images, after weeks and weeks of printing the edition, it is finally finished. I shipped the edition to Paris, where Robert signed them, and I have just received them back. So now we are ready to ship them to you on September 28.
"The edition is printed on Rives BFK archival 100% cotton cream paper. The sheets are 22" x 30". The image size is 16.5" wide x 25" tall. There are 15 colors (16 screens) used to print this edition. Because of the tremendous amount of work both Robert and I put into this edition, we are required to raise the price slightly to $380 per print. There will be a $12 shipping charge to those in the United States and a $25 International shipping charge. Each print comes with our unconditional guarantee for your satisfaction or your money back.
"Because all of you who have signed up for the Newsletter are Crumb fans, I am previewing part of the copy Robert wrote for the Certificate of Authenticity which accompanies each serigraph. Hopefully, this will answer the very natural question as to why Robert Johnson is not included in the print."
Many people have heard of the blues singer Robert Johnson, who recorded in 1936-'37 and died shortly thereafter. He is probably the best remembered of these old time blues singers, though I would argue that he is not necessarily a better singer or player than many of those pictured here. So why did I not include him, if he's so well remembered? The sad fact is that the only known photographs of Robert Johnson are in the possession of a man who will instantly threaten to sue anyone who even dares to make a drawing based on either of these photos, and his permission comes at a price; a percentage. I've been through shit with this man in the past over a drawing I made of Johnson from one of his photos and which I had reproduced for commercial purposes. He sent nasty, threatening, lawyers after me, so I don't mess with Robert Johnson. I hate the man who owns those photos and want nothing more to do with him.   I would tell his name except I'm afraid he would try to sue me again.  And that's why poor old Robert Johnson, who was buried in a pauper's grave, is not included in this set of "Heroes of the Blues."
-- Robert Crumb
Posted by Tom at 11:34 AM