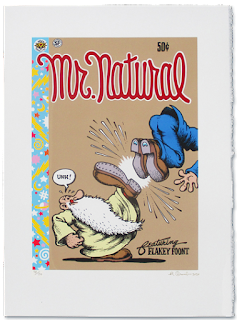 In celebration of its 50th Anniversary, Wildwood Serigraphs and rcrumb.com announce the release of Crumb's serigraph edition Mr. Natural #1.

Crumb drew and published his first Mr. Natural comic book in 1970. 50 years later we're releasing that cover as our new edition with slight revisions per R.C's request. The yellow explosion from Mr. Natural's shoe as he's kicking Flakey Foont was originally filled with yellow, which had always bothered Crumb. By his instruction, it's now changed to white. The masthead was initially some kind of dark blue which Crumb requested we change to a "blood red." You can learn more about the edition, Crumb's color selection and the way we printed it on the blog section of the website.

The edition is 90 prints using Rives BFK 280 gram archival paper. The paper is 18" x 25." It's a 13 color edition. The image is 13" x 18.5." Each print is numbered, signed and dated by Crumb. Each print also comes with its own certificate of authenticity, which was written by Crumb. Your satisfaction is guaranteed. 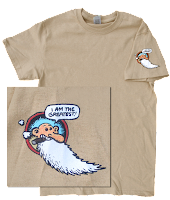 We're releasing a new line of t-shirts called Crumb Subtle-T's. It's for all of us who don't want to wear anything printed on the front of our t-shirts, so we can feel more comfortable in our 100% Ultra-cotton t-shirts. We're not promoting anything, we've got nothing to say, nothing to prove, nothing to promote... except maybe, very subtly, we might want to say, "Natch is the greatest!" Or "Anyone who's well-adjusted is sick!" (taken from Crumb's Modern Funnies strip, 1977). These images are printed only on the left-sleeve to subtly state your enjoyment of Crumb's genius. It's fun, it's understated, it's comfortable, it's subtle and it's summer, so we're making them available to you now. 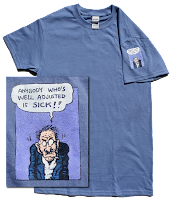 Important Note About The Newsletter!!!
We'll slowly be changing over to our new Newsletter on rcrumb.com. If you're currently signed up to our old Newsletter, we recommend you sign up on the new one (go to the front page of rcrumb.com and sign in there). We'll be using both Newsletter addresses for the next several postings, but eventually, the old Newsletter will have to be discontinued.
Posted by Todd Merrick Novak (aka beanlynch) at 1:25 AM