Each summer I sell prints from my personal print collection, or prints acquired in trades. All of these prints are from editions that are now sold out. They're in mint condition and have been stored in a flat file where they have never been exposed to light. I highly recommend using UV protected glass if you're going to buy and frame any of these prints. 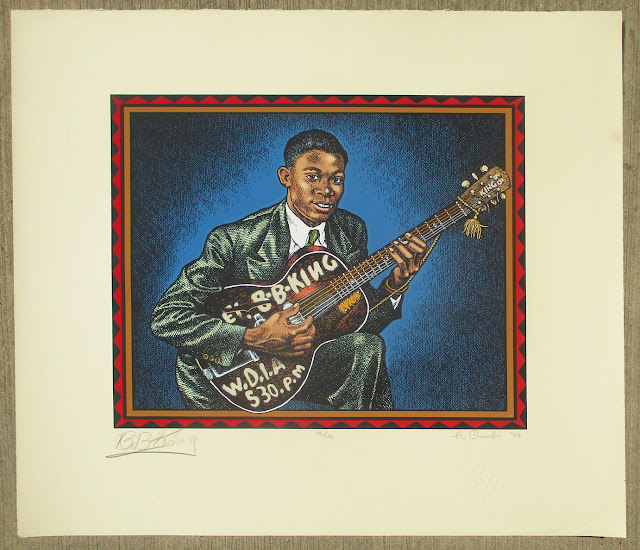 BB King
This serigraph is part of a 245 print edition released in 2002. Using 30 colors, it turned out very nicely. The image size is 17” x  14”. The cream paper size is 25” x 22”. This is print number #18/245. However, I do not, for some reason, have its Certificate of Authenticity. So this prints does NOT have its cert. But, considering that Hypergallery in London is selling a print from this same edition for 6,000 pounds, I think $1100 is a fair price without its cert. Mint condition, never has seen the light of day.
$1100
BUY ME 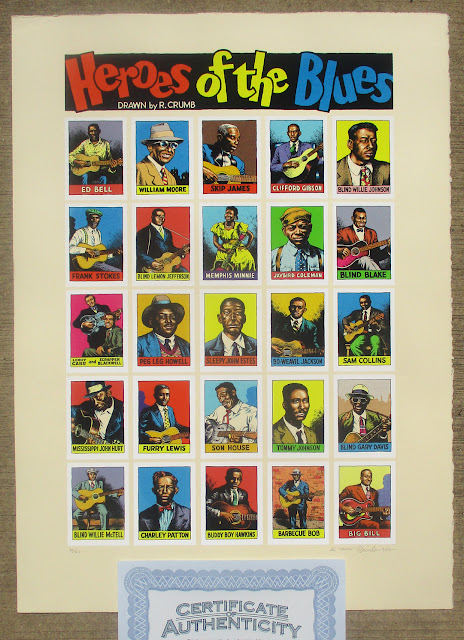 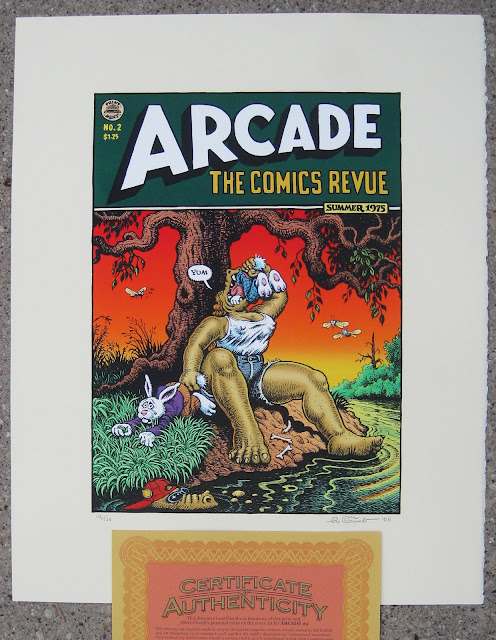 Arcade Serigraph Print #112/120
This 120 print edition was printed and signed in 2005. It took a while to sell out but it remains a high point in our collection of editions. There were 23 colors and 21 screens used to create this edition. The registration and spit-fountains (a total of five blends were used in the edition!) work perfectly. I was also able to hold the best detail with 230 mesh/dpi dither output of the films I used–the perfect combination. I think, as a printer, this is one of the best editions I've printed. The image size is 13" x 18.5". The cream paper size is 20" x 26". Comes with its cert, written by Crumb and signed by both Jesse and Alex. Mint condition, has never seen the light of day. This is print #112/120. Nice sig by Crumb.
$700
BUY ME 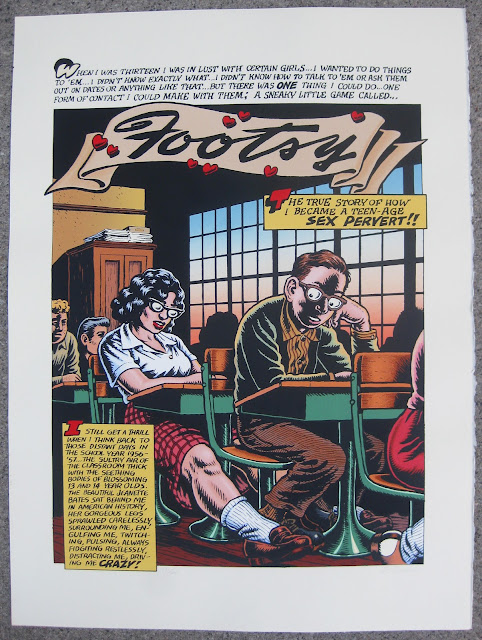 Footsy Serigraph Print #180/200
Footsy is the first edition I printed and published with Crumb in 1994. I used almost 30 colors and 4 blends to convince Crumb we could create a really fantastic edition. There are 200 prints in the edition, and this is print number 180/200. There was no certificate created with this edition. And it was also before Crumb dated his serigraphs next to his signature, so it has only the print number and his signature. He also signed this in hard pencil in France, far away from me so I couldn't suggest he use a softer, darker pencil. So his signature is too faint for my taste, but it's there if you look closely. Whatever its limitations may be, I was always very happy with the way this edition turned out. The cream paper is 22: x 30". The image size is 18" x 25". Mint condition, stored flat, never has seen the light of day.
$750
BUY ME 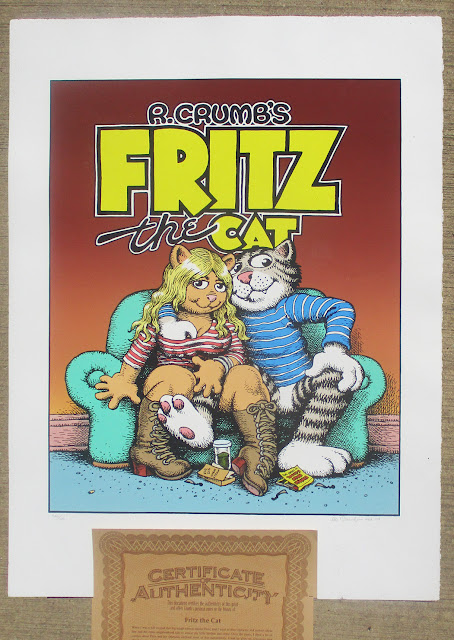 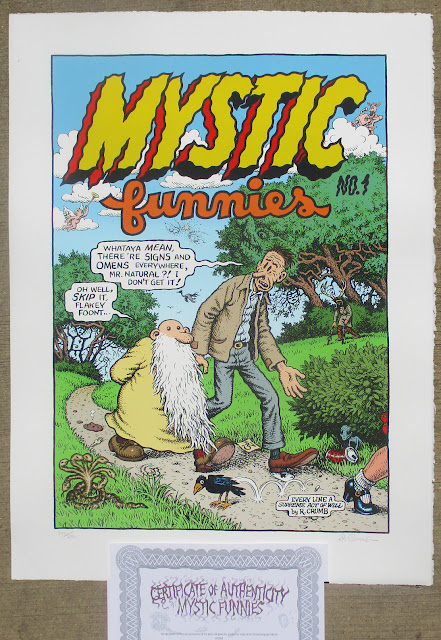 Mystic Funnies #1
Mystic Funnies #1 was released in 1998 as a 200 print edition. The image is 17.5” x 25”. The Rives BFK archival paper is 22” x 30”. 31 colors were used to print this edition. This is print number #190/200. It comes with its Certificate signed by both Jesse and Alex. Numbered, signed but not dated by Crumb. Crumb did not date his editions at that point. One of the last editions he signed but did not date. Natch and Flakey at their best. 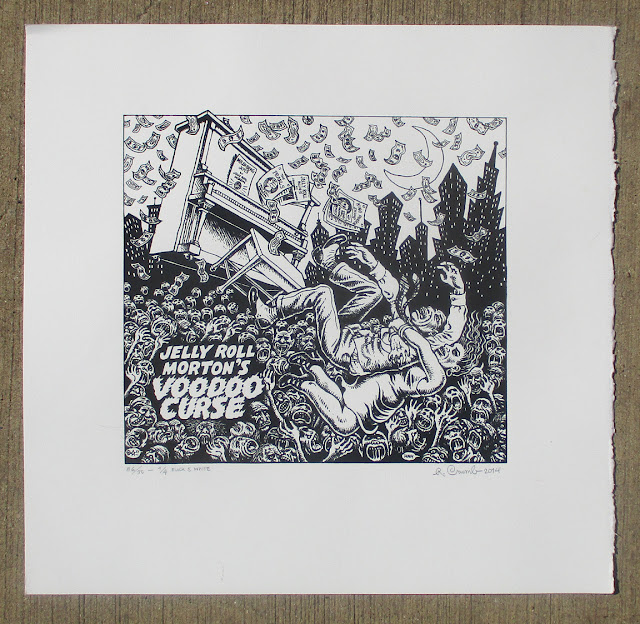 Jellyroll Morton’s Voodoo Curse
This is sort of a rare print. This is from the Jelly Roll Morton serigraph edition we released in 2014. It was a 90 print edition, but 4 of those prints, the last four, are printed with only black ink–no color! This is print number #86/90, signed and numbered by Crumb. Comes with its own cert. The image is 12” x 11”. The archival white paper is 19” x 18”. 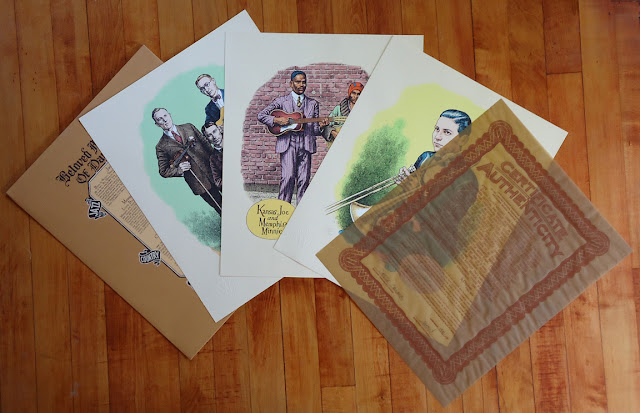 Beloved Music Makers of Days Gone By Portfolio
Released in 1999, this portfolio contains three screen prints of Crumb portraits. The prints are enclosed in a printed portfolio case which is also screen printed. The writing and artwork was done by Crumb for both the portfolio case and Certificate of Authenticity. The prints are 13” x 16”.  It’s an edition of 200 and this is portfolio number #178. The Certificate is signed by both Jesse and Alex.  The three prints inside (Jack Teagarden-jazz; Memphis Minnie & Kansas City Joe-blues; The North Carolina Ramblers-country) are each signed, dated and numbered by Crumb. Mint condition. 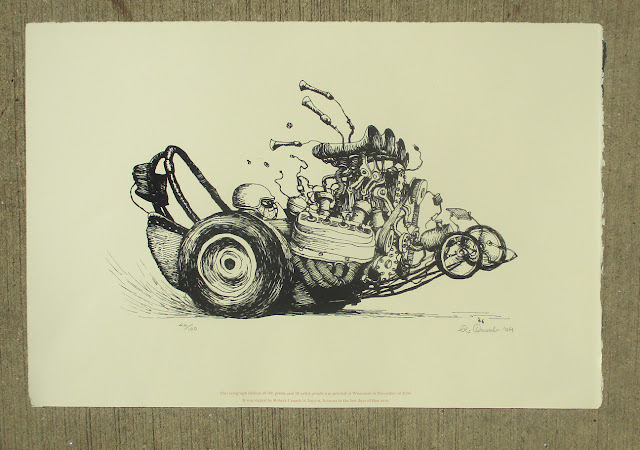 I printed this edition for Jesse (which he published) in 2004. It was an edition of 100. The archival cream paper is 22” x 15”. This is print number #44/100. There was no Certificate created for this edition. Numbered, signed and dated by Crumb. 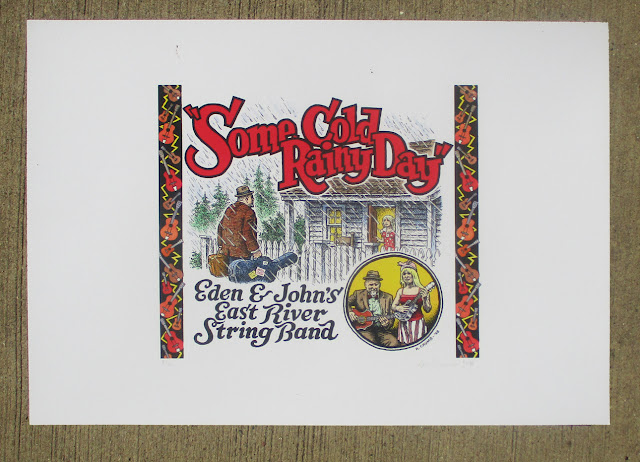 Some Cold Rainy Day was created as an album cover for one of Crumb’s old time music buddies. Alex Gold then had some of the images printed (giclee prints) for an edition, but I’m not sure they printed all of the 25 prints planned for the edition. This printed is numbered by Crumb as 3/25. It’s also signed and dated (2008) by Crumb. However, Crumb used such a hard pencil, it’s difficult to read his handwriting or signature. No cert was issued, but a nice little piece for your collection. 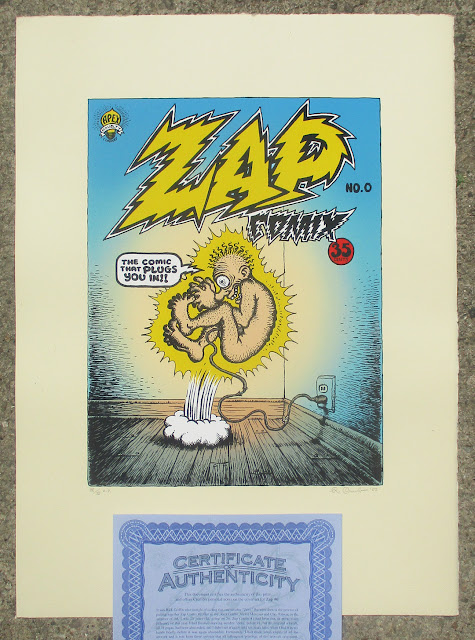 Zap #0 was printed and released as a 110 print serigraph edition in 2007. There were also 11 artist proofs and 3 printer proofs. This an artist proof I’m selling for a friend of Crumb’s. He had given it to her and now she wants to cash it in. It’s in mint condition, never been matted or framed. It’s A.P. IV/XI (4/11). The image is 15” x 21”. The archival paper is 22” x 30”. There were 14 colors used to create this edition. Numbered, signed and dated by Crumb. It comes with its Certificate of Authenticity signed by Alex. 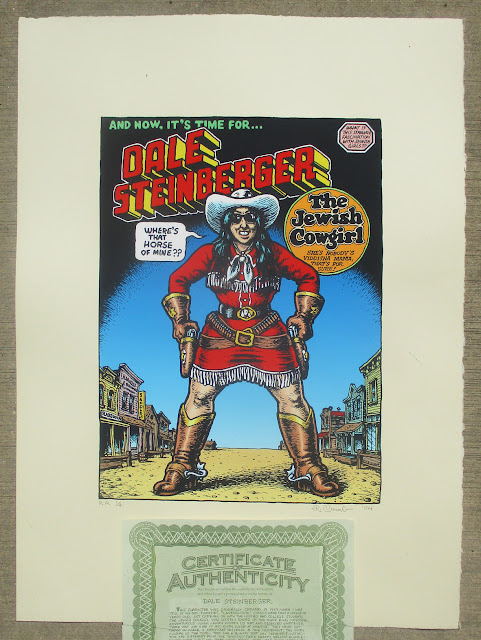 There are 200 prints in this edition, with 17 Artist Proofs and 4 Printer Proofs. This print is from my collection of printer's proofs. It's numbered 1/4.  The edition was released in 2004. The cream Rives BFK paper is 22" x 30". The image size is 14" x 19". The certificate, written by Crumb, is signed by both Jesse Crumb and myself. Nice blend in the sky. Mint condition, stored flat, never has seen the light of day (except when it was photographed!). 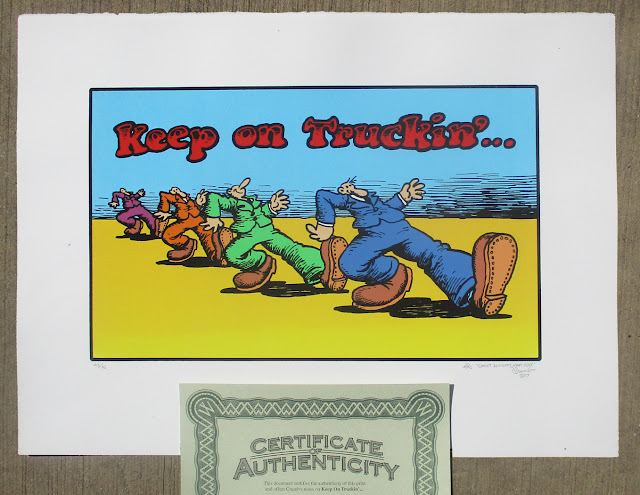 In 2017, we released Keep on Truckin’ as a 95 print serigraph edition and it sold out very quickly. It was printed with 13 colors using 12 screens. The image size is 19" by almost 12". Each serigraph is numbered, signed and dated by Crumb in pencil.  This is print #43/95. Comes with its Certificate of Authenticity written by Crumb. It also has a customized signature reading: R. "Christ Almighty, What Next" Crumb. 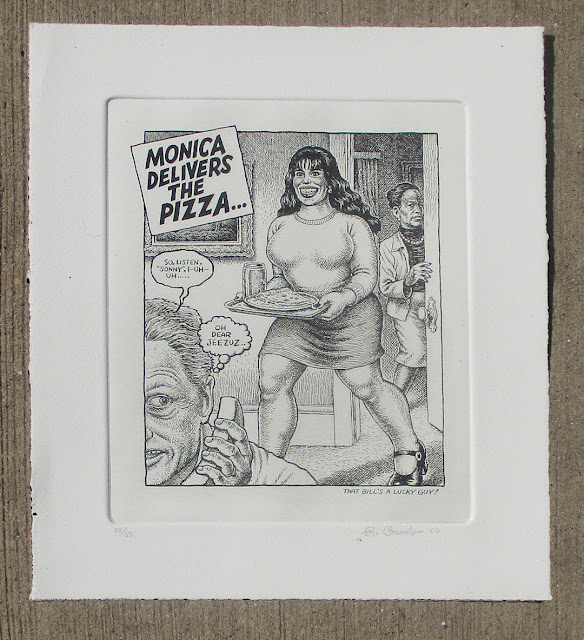 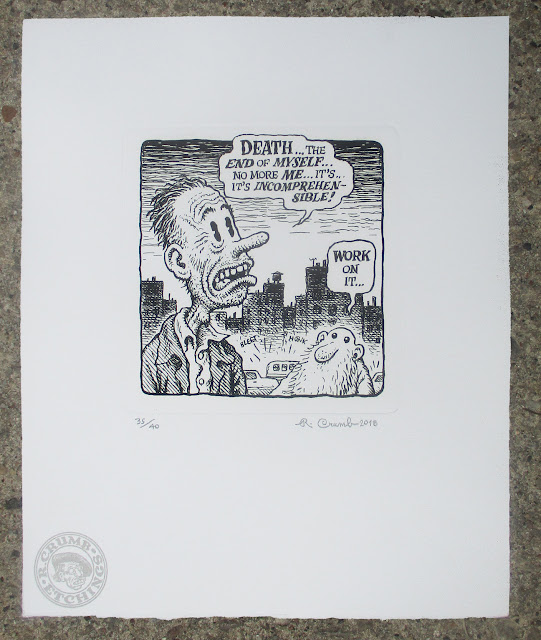 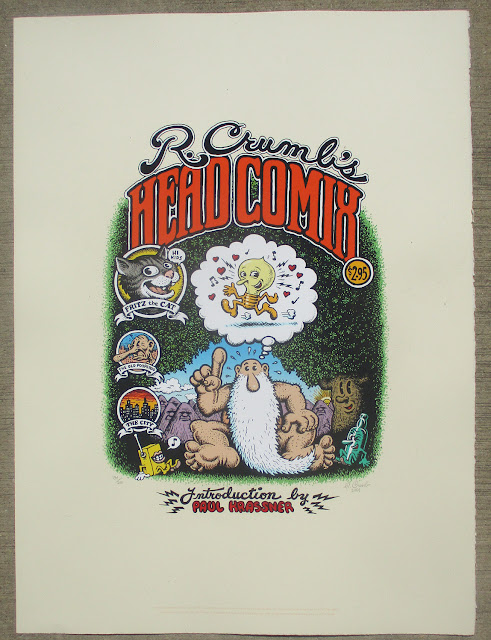 This edition was printed in 2001. The edition never had a certificate created for it. There is a very light indicia printed at the bottom of the cream paper (which is 22" x 30"). The image size is 14" x 18.5". There were 18 colors used to print the edition. Numbered, signed and dated by Crumb. This is print number #194/200. Stored flat; never has seen the light of day, mint condition.
$550

Important Reminder About The Newsletter!!!
We'll slowly be changing over to our new Newsletter on rcrumb.com. If you're currently signed up to our old Newsletter, we recommend you sign up on the new one (go to the front page of rcrumb.com and sign in there). We'll be using both Newsletter addresses for the next several postings, but eventually, the old Newsletter will have to be discontinued.
Posted by Todd Merrick Novak (aka beanlynch) at 11:36 PM